Su-Su-Sudio…no, that’s not how you pronounce it…it’s Susumaniello! Sure it’s hard to pronounce and it really has nothing to do with Phil Collins or Genesis. But the folks at Ruggero Di Bardo (Puglia, Italy) concocted a magnificent wine from a little known grape (Susumaniello) that’s gaining quite a following. And there are lots of reasons for it’s popularity… First, you can get this wine at Trader Joe’s. Second, it’s ten bucks and finally, it pours like a wine three times its price. Yes, there are surely some terrific bargains in many regions of Italy, but this Puglian star is really quite good. The wine pours out with a deep garnet color where light gets swallowed up. There’s good initial fruit on the palate followed by some nice mouth-feel and mid-long finish. We had this with a variety of cheeses and roast chicken with good results. While this was enjoyed with a variety of foods and might pair with a wider variety of cuisines (beyond barbeque, burgers, pizza and red-sauce pasta), it likey won’t be enjoyed (at least in our household) with Phil Collins’ ballads playing in the background as he’s banned from air play in our home (Sorry Phil, I lost that battle). I stongly suggest you venture out to Trader Joe’s to acquire some Susumaniello so you too will be singing its praises.

VinoDuo is [are?] Lisa and Gary. Engaged in Sonoma. Honeymooned in Napa. Traveled the country and parts of the world eating, drinking and soaking in the wine culture. We hope you’ll come along on the ride. 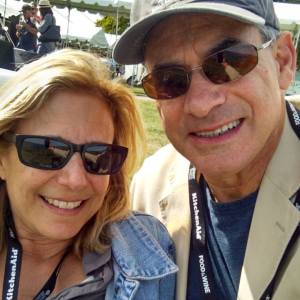 For info on where to send samples, scheduling tastings or visits to your winery, email us at info@vinoduo.com