2015: Crossed-Up Blind Tasting — Napa Cabernets
I’m an old Jethro Tull fan. One of my favorites from Aqualung is “Cross-Eyed Mary” whose opening line is “Who would be a poor man, a beggar man, a thief –if he had a rich man in his hand? And who would steal the candy from a laughing baby’s mouth if he could take it from the money man?”

Those lyrics flashed through my head when I learned of the brazen grape thievery conducted by Napa Valley’s Jeff Hill Vineyards. (Read the New York Times article) Jeff Hill Vineyards was a small, well-regarded Napa winery that was hemorrhaging money and likely headed for bankruptcy. In October 2013, Mr. Hill’s vineyard crew was hired out to assist with the harvest in neighboring vineyards, including the celebrated Howell Mountain Vineyard owned by Del Dotto, a small-batch, prestigious Napa producer whose Cabernet retails for $195.00 a bottle. The crime: Allegedly, instead of delivering all of the harvested grapes to Del Dotto’s winemaking facilities, several loads were mysteriously diverted to Mr. Hill’s winery.

What Jeff Hill planned to do with those premier grapes is a not really a mystery — make wine with the stolen fruit and charge a pretty penny for it.  Fortunately, our friends at InVino snapped up several cases of of Hill’s inventory at a bankruptcy auction for cents on the dollar. We bought a 1/2 case for $30/bottle (down from $96)

The Tasting Plan
The thieving ways of Mr. Hill brings us back to “Cross-Eyed Mary.”  If Jeff Hill was the thief in the lyrics, could VinoDuo find other California Cabs to stand in for the three other “men” in a blind Napa taste-off?  Could Gary, Lisa and their wine-savvy friends tell the difference between a prestige Napa cab (rich man) a lower-priced cab from neighboring Sonoma (poor man), and a “mystery” bottle of Napa Cab from a négociant, who buys excess fruit and wine from multiple growers and produces/bottles wine of unknown provenance (beggar man)?  Of course, négociants don’t actually beg for grapes, but they go from vineyard to vineyard seeking the best leftovers and the lowest prices. 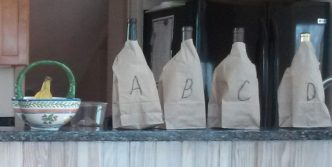 The Competitors
Sheathed in brown paper bags labeled A – D, and with no discernible markings, these four wines were put to the test:

Wine from two different valleys and three different years is not exactly kosher for a horizontal tasting, but then, we’re not Robert Parker…just two amateur wine lovers. So there.

The blind tasting winners? Tasters #1 and #2 correctly identified all four wines and also won the extra credit for guessing Trinchero as the highest priced bottle.  Although, technically, the Jeff Hill Cabernet would have been the most expensive pour if he hadn’t blown everything and sold his inventory for pennies. Other observations?  Great Napa cabs are readily identifiable and likely worth the money—the Jeff Hill and Trinchero stood out as the superior wines. In fact VinoDuo just raved about Mario’s Vineyard 2016. However, at $38, the Miro Pine from Sonoma is a far better deal: a big, food-friendly Cab without the Napa label or high sticker price. And under the category of “you get what you pay for,” the Cameron Hughes Cab, with its mystery origins, was universally panned by our tasters.

VinoDuo is [are?] Lisa and Gary. Engaged in Sonoma. Honeymooned in Napa. Traveled the country and parts of the world eating, drinking and soaking in the wine culture. We hope you’ll come along on the ride.

For info on where to send samples, scheduling tastings or visits to your winery, email us at info@vinoduo.com